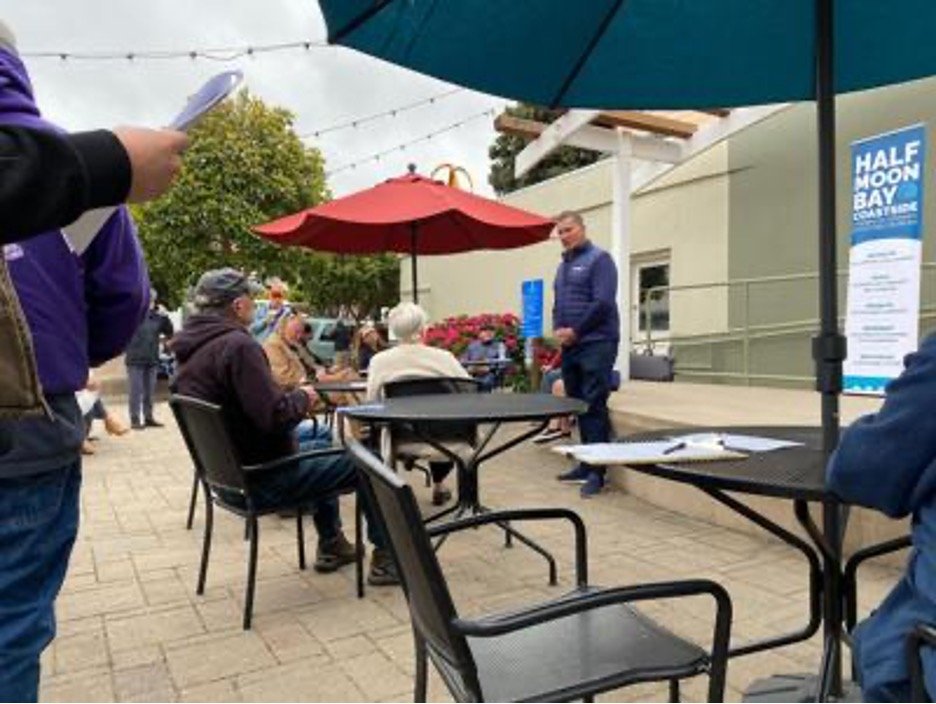 Americans with Disabilities Act compliance specialist Steven Schraibman speaks to a rapt audience of downtown business owners on July 14. Some Half Moon Bay businesses have been hit with lawsuits for failing to meet the letter of ADA requirements. Clay Lambert / Review

A handful of downtown Half Moon Bay entities are being sued for alleged violations of the Americans with Disabilities Act. According to court records, the Main Street businesses and organizations being sued by Gilbert Salinas include Jungletraders, Cottage Industries, Abode, Cafe Society, Half Moon Bay Bakery and the Half Moon Bay Odd Fellows.

The Americans with Disabilities Act of 1990 is intended to ensure that persons with disabilities are not discriminated against when it comes to using public accommodations. Violations can range from large to small, from misdrawn parking spaces, misplaced or imperfect language on signs, to inaccessible bathrooms or countertops.

On July 14, the Half Moon Bay Coastside Chamber of Commerce and Visitors’ Bureau hosted a public information meeting at Mac Dutra Park so business owners could get a handle on what they were experiencing. The chamber enlisted Steven Schraibman, the president of Arcor Inc., a San Diego-based architectural and construction consulting firm specializing in ADA compliance, to speak to the assembled crowd of nearly two dozen people.

Schraibman said “serial plaintiffs” usually file many lawsuits in quick succession that end up being settled in exchange for a payment and an agreement to fix the violation. In the last few decades, California has been a hotbed for these cases. The average settlement ranges between $12,000 and $20,000. In court, federal law allows fines up to $75,000 for the first violation and $150,000 for additional violations. And, if plaintiffs win, they usually ask for legal fees to be covered by the defendant, adding to the expense.

Salinas is represented by Amanda Seabock of the Center of Disability Access, a subdivision of the San Diego-based firm Potter Handy. According to court records, Salinas has been the plaintiff of 16 ADA cases since March.

Over the past three years, the Odd Fellows Lodge has made ADA upgrades to its building at an expense of more than $500,000, including the installation of an elevator. Joe Brennan, president of the Odd Fellows, said it was “frustrating” to invest so much into resources for disabled individuals only to be hit with a lawsuit.

“We’ve been very supportive of (accessibility rights),” said Brennan. “So, it’s just such a crushing thing to be involved in this aspect of it.”

Though it can be daunting to face down settlements, there are a few ways businesses can be protected from charges. Schraibman said one of the more effective ways to stop these lawsuits in the first place is for businesses to work with a certified access specialist for what is known as CASp certification before a lawsuit or demand letter arrives, and to fix construction-related violations noted by the inspection within 120 days.

Certification occurs when a specialist audits the building and creates a plan to fix violations within the owner’s budget. Afterward, the business becomes a “Qualified Defendant” that receives a printed certification that can be placed in a store window. The idea is to get rid of “low-hanging fruit” and discourage potential plaintiffs who will understand the business has taken steps to abide by the law.

“It actually notifies would-be plaintiffs to drive on by,” he said.

Tricia Guidance, the landlord for Abode, said she’s been in real estate and ownership groups for a while and has seen ADA lawsuits before.

“I have sympathy for any tenant that has to deal with this,” Guidance said. “But as a business and property owner, I am very aware of the need for anybody, handicapped or otherwise, to have safe access to business. I’m happy to comply if my building is not completely handicapped accessible.”

“We’re seeing serial plaintiffs coming out of the woodwork now that we’ve never seen before,” he said.

Schraibman said that protecting the rights of the disabled is important, but added that a few people are taking advantage of the ADA law for personal gain.

“It’s a righteous law. Any one of us could get disabled, and there are a vast number of disabilities that describe a full spectrum,” Schraibman said. “But the point is that serial plaintiffs and their attorneys are driving the bus.”

Such lawsuits have occurred before on the Coastside. In 2018, several El Granada businesses, including The Press, Easy Mart, India Beach and Harbor Pizza, dealt with alleged violations and were contacted by the Center for Disability Access.

Krystlyn Giedt, the CEO of the chamber, said she spoke with the Alameda Chamber of Commerce, which said its downtown had been hit with 28 ADA lawsuits recently. Giedt said that it’s unfortunate that a law with good intentions is leveraged by those allegedly looking to make money.

“This going on in a normal time would be devastating,” Giedt said. “Coming out of COVID, there are two businesses who have already noted they made it out of COVID by the skin of their teeth. This will sink them if they have to pay.”